We fight for the hope and happiness of young people when it's threatened by abuse, exploitation and neglect. We see the hope and courage in young people every day and we support them for as long as it takes for them to break free from their trauma.

Now we're stepping up the fight for hope at a time when it's under threat like never before. With your support, we can be there for young people trapped in a cycle of crime and abuse. Together we can help them break free and see their future is theirs to own. 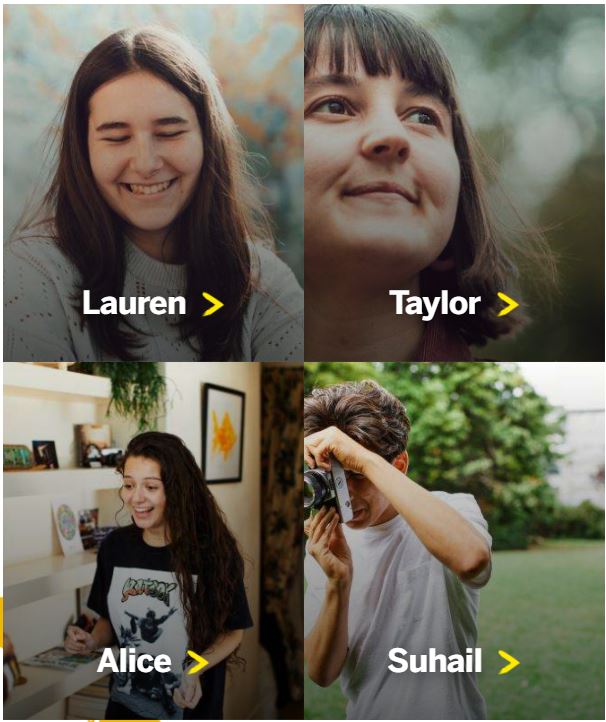 In their own words

When young people want to tell their story, we listen. These young people still believe in a better tomorrow. They know they can break free from those who hurt them, have a happy home life, feel better over time.

Often their stories aren't easy to tell, but they tell them. Because they know sharing their story will help them and others like them. 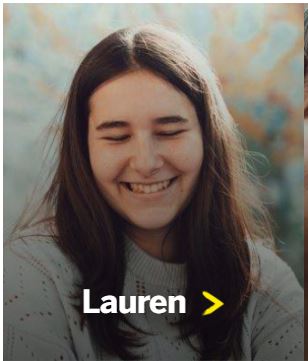 Instead of enjoying school and seeing friends, Lauren spent two years as a teenager trapped in dirty houses with child abusers. She believed this was all life could be for her. With our support, she managed to break free. She is safely back with her family, going to college and focused on becoming a support worker to help others.

2 years ago Lauren was top of the Child Protection Register. Police feared she would be found dead in months.

50 times Lauren was reported missing, often being found in the house of known child abusers.

Lauren didn’t feel safe at home. She didn’t want to be there. When a group of older men started chatting to her online, she finally felt people cared about her. They listened, made her feel special. If she needed a bed to sleep, they gave her a place to stay. If she was hungry, they bought her food

hen, things started to change. Lauren’s new ‘friends’ started taking her further away from home - to strange houses, with men she didn’t know, often for days on end. They plied her with drugs, made her stay awake, forced her to have sex. She was scared, confused - just a child on her own with no way to get home. She blamed herself for not being able to stop them

Lauren didn’t know where to turn. She was afraid her mum wouldn’t understand and was terrified of what the men would do if they found out. Traumatised and dosed up on a cocktail of drugs from her abusers, Lauren stopped going to school. When the police found Lauren in the house of a known child abuser, after being missing for five days, they realised she needed urgent specialist support. That's when Lauren met Emily, one of our child sexual exploitation workers

Emily and Lauren met every week. Lauren was suffering from severe PTSD and still in extreme danger of going back to her abusers. Lauren says 'If I hadn't gone and taken that help, I would probably be dead or kidnapped.' Together they began to build up Lauren’s self-esteem and she became able to recognise the signs of abuse and manipulation.

With Emily’s help, Lauren also created a safety plan so she knew what to do in situations where she felt anxious or in danger. She gave her a number to call any time of day or night, no blame, no judgement. As her confidence and happiness began to return, Lauren started to feel like herself again. Today, Lauren is in college and has rebuilt her relationship with her family. She stopped replying to her abusers’ messages and blocks people she doesn’t know on social media. She knows how to stay safe online but at the same time, can 'talk to people more and express how I feel.

Lauren is now focused on becoming a carer or support worker so she can turn her experience into something that can help other children. She says, 'I could be there, the one to help them through it all, so they're not alone, so they feel safe and know they can talk to someone about it' 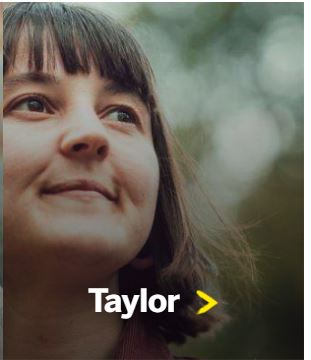 Taylor loves to sing and draw. Today, she is a confident young woman – but it wasn’t always like this. Taylor lost those closest to her when she was young. Desperate for a connection, she got into an abusive relationship and things started to spiral. At her lowest point, she took an overdose. It was only when she met one of our project workers that she started to believe her life could get better.

As a baby, Taylor lived with her grandparents. Her mum struggled with mental health and her dad wasn't around. When Taylor was 11, her mum was sent to a mental health unit permanently. Then her grandad died. She was alone with her trauma, vulnerable to exploitation.

Desperate for love, she got into a relationship which quickly turned toxic. Her boyfriend was manipulative, controlling, got her addicted to cocaine. She started missing work, sleeping all day, going on drink and drug binges to numb her pain. Her life was in turmoil, but she didn’t know how to stop.

‘I was so desperate for anything, cause I was lonely and I didn’t even feel like I had myself. I didn’t know who I was. I was just broken. I was being told when to stand up, sit down, when to talk, when to shut up by my boyfriend’. At her lowest point, Taylor took an overdose and ended up in same mental health unit her mum was being treated in. ‘I was just done. It was either make it or that’s it, so if this is life, I don’t want it, you can have it, take it, I don’t want it.’

When Taylor left the unit, she desperately looked for support, but no services would help her until she stopped using drugs. Struggling to quit, she looked online and found The Children Society. ‘I felt like I hadn’t been heard before that. And it was a relief. To finally be honest with someone and have no judgement for it and have someone say this is what you can do and this is how you can do it.’ The more Taylor spoke with Gemma the more she started to understand the emotions and trauma that had cause her so much pain. She realised that she now had someone who would listen to her and support her. For the first time in years, Taylor started to believe that her life could begin to get better.

Taylor’s 24 now. She has come a long way. She is chatty and confident. You’d never know from talking to her how hard she’s had to work to get to where she is today. She has come such a long way. But that’s the difference that having someone who listens to you and believes in you can make. Now Taylor knows the strength she has. She knows she has the power to shape her own future. Taylor’s is fascinated by psychology and with our support she’s setting her sights on university. She is so excited to see what life holds for her. Taylor's future is bright. She wants to work in prisons so she can support people who are struggling and need help. She knows that answers can be found just by taking the time to hear what people have to say. 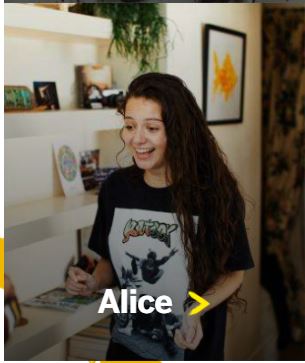 Alice had a rough childhood. The abuse happened when she was six and again at 16. She still has flashbacks. But she’s moving on now. She’s signed to a record label. She’s meeting people and doing what she loves. Alice was six when she was sexually abused by her father. ‘I didn't have a clue at the time what had happened; I just knew I was upset and something was wrong.’

She grew up thinking abuse was a part of childhood. When she was drugged and abused at a house party, she thought it was normal. ‘I thought I was on the planet just to be used by men’. Alice became a very anxious 16 year old. Every time she left the house, she would face her abusers. She started missing school and stopped going out with mates.

As much as she wanted to, Alice couldn’t talk to her mum about it. ‘I was a carer for her and she has bipolar, so it was very hard to talk to her.’ Alice toughed it out alone, unsure what her future would look like, until she met Suzanne. Suzanne is one of our practitioners who specialises in child sexual abuse and exploitation. She was a stable presence in Alice’s life, someone Alice could depend on. ogether they worked through the signs and dangers of sexual exploitation. Alice began to make sense of what had happened. She now knows if someone is trying to take advantage and has the confidence to get out of dangerous situations. ‘I’ve been able to put it all into action’.

Since meeting Suzanne, Alice has become more confident and no longer self-harms. She still gets anxiety and painful flashbacks, but she is determined to challenge them. Alice no longer sees herself as someone to be abused. Today, Alice is a signed musician. She’s always loved singing but now she’s doing it for real. She’s also the person people talk to when they’ve got something going on. 'I can always take at least one positive out of all the negative things’’. She likes it when people call on her. ‘It always makes me feel better, because I want to go into helping people.’

Alice still feels anxious and scared at times, but she doesn’t let it drag her down. She is optimistic about her future and wants to give something back. ‘If there’s one message that I could give to other young people, who are having their own challenges, it would be there’s always a way to get out of a bad situation. There is always a way, no matter how deep you’re into something.’ 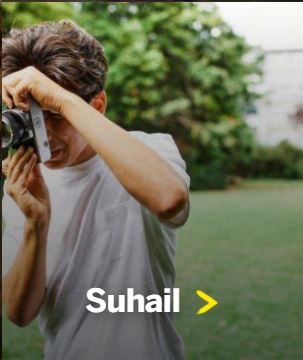 Suhail arrived in the UK aged just 14 years old. Like many young refugees and migrants, he had to fight hard to start a new life. He struggled with mental health but has now found his feet. He has a passion for photography and takes photos of his time in London. When Suhail first arrived in the UK, it wasn't easy. 'You basically start a new life, in a new country, new culture, with new things around. It’s like you’re stuck in the middle of somewhere like clay or quicksand. When you try to get out, it’s really hard.'

Being alone, he had to learn to get by the hard way. ‘It’s really extremely hard, because you don’t know anything. Especially if you have to do everything on your own without your family.' At first he felt desperately sad. He had no one to turn to. 'I used to get really emotional, I felt like crying.'

Suhail was introduced to us and we were able to work with him through his more difficult times. We helped with his age dispute and supported him with his mental health. 'Many times I struggled to keep my life. I was going to end it. But it was The Children’s Society and their help, giving me a plan and what I should do when I felt like this...I can definitely say that is one of the reasons I am still alive now.’

Suhail is feeling more confident now 'and hoping that everything will one day sort out.' 'All the different ways I have experienced difficulties, losing my family, coming here, I learned from each of them. I got the wisdom and understanding from these things.’ Hopefully I will get back to my family and find them, and go to university. Being the person that I want to be.'