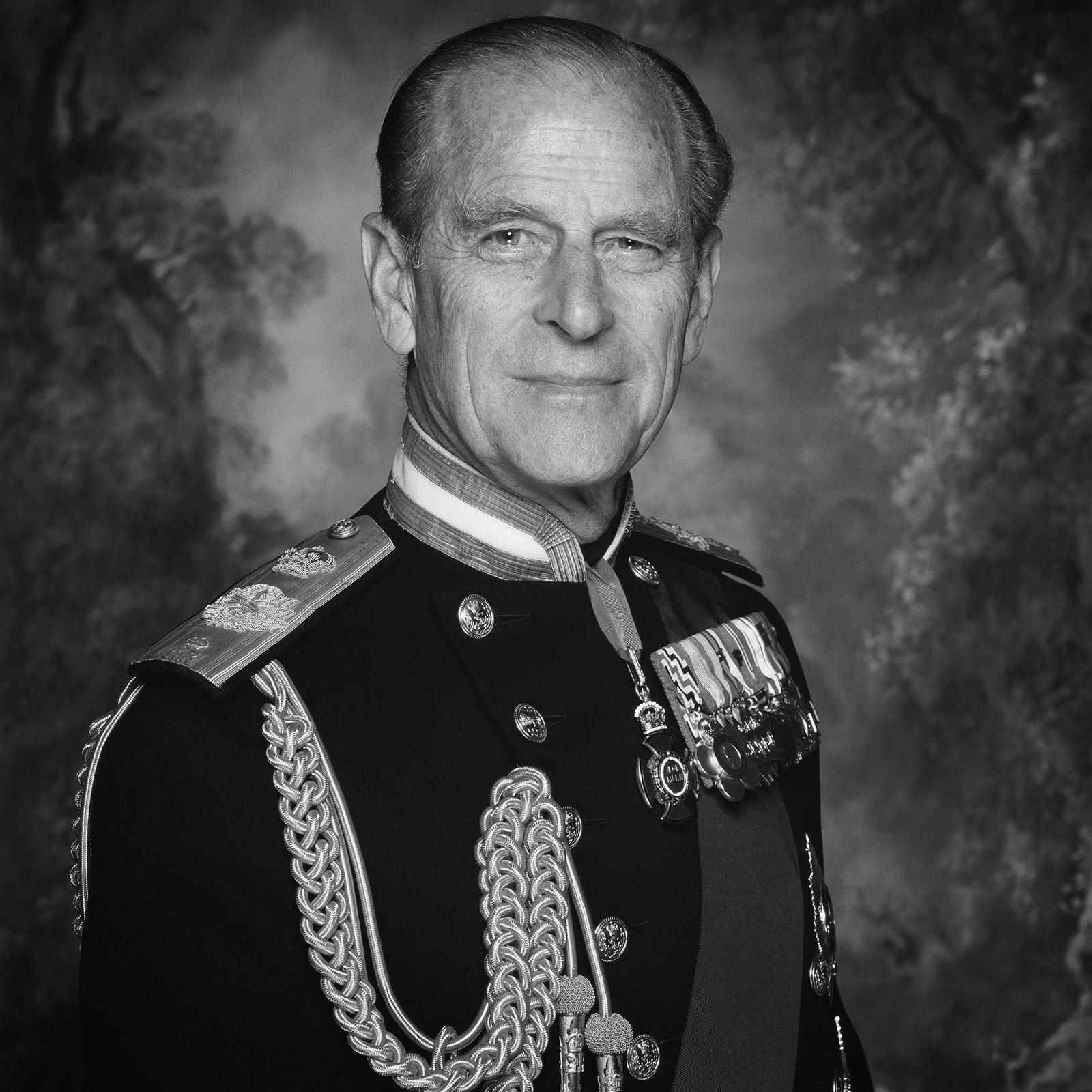 We often remember what we were doing at the announcement of the death of a public figure. I will remember learning the news of Prince Philip’s death while talking with one of our local funeral arrangers while walking along the High Street.

Highness, Prince Philip, Duke of Edinburgh to the innumerable other tributes pouring in from across the world as I write this.

As on any death our thoughts and prayers are most of all with his loved ones, Her Majesty the Queen, and the whole Royal Family, that they will know the peace and comfort of the risen Jesus in their time of grieving and loss.

The Church of England encouraged everyone to write in online Books of Condolence. Click for the National, or the Church Books of Codolence. 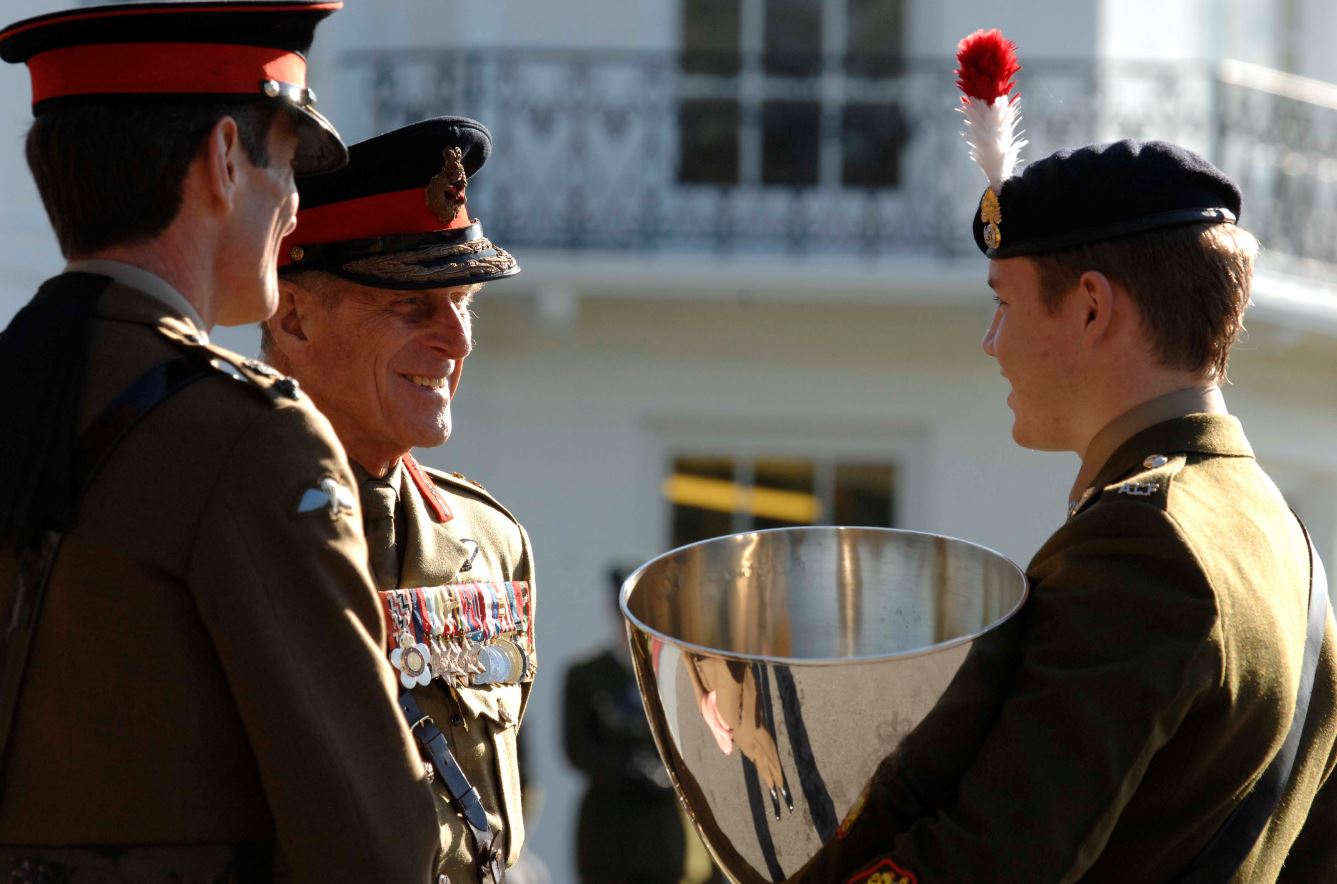 his funeral served as reminders me of the many occasions he was involved with the Cadet Forces, the Cadet Training Centre and, by close association, St Peter’s Church. In different circumstances, the cadets with their Banners would have been “on parade” at St George’s Chapel that day.

The Duke's visit to the Cadet Training Centre in 2008. He has
just presented the ACF Champion Master Cadet with the large
trophy you can see. The other person in this picture is the
Commandant of CTC, Lt Col Henry Eagan.

Prince Philip was a great champion of the young and delighted in his role as the Army Cadet Force’s Colonel in Chief, an appointment that he held from 15th 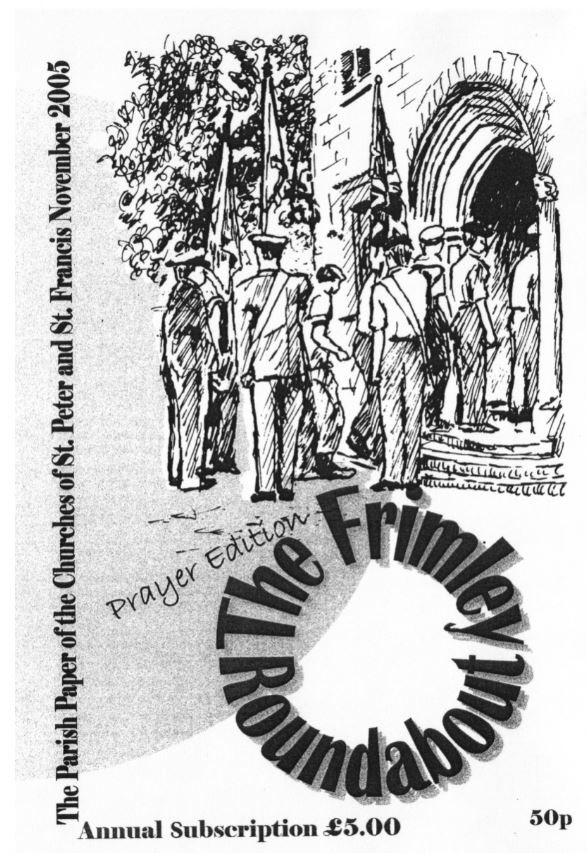 January 1953, succeeding his late Majesty King George VI.  On the 9th of February 1960, to commemorate the Cadet Forces Centenary, he presented the ACF with his own personal Banner at a service in the Chapel of St Peter ad Vincula in the Tower of London; it bears his Royal Cipher embroidered in gold. In the same year, Her Majesty The Queen, the Captain General of the Combined Cadet Force, presented the CCF with their own Banner. Both can be seen above the gallery at the back of the church. (Click the graphic for the 1960 article)

After the dedication of the ACF Banner, Prince Philip said at the start of his address:

“A hundred years of devoted service to the nation deserves to be recognized and celebrated.  It therefore gives me great pleasure to present this, my Banner, to the Army Cadet Force at the start of its Centenary Year.” 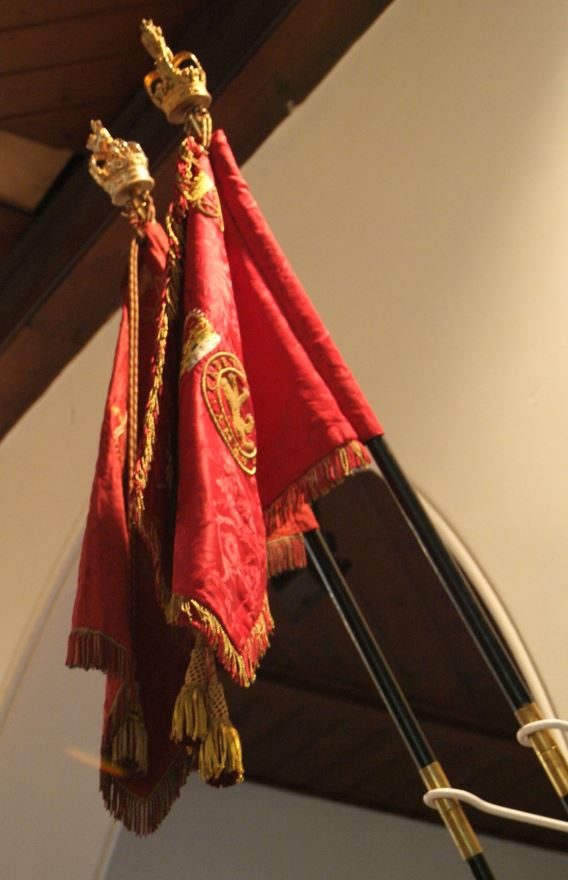 Edinburgh presented a replacement Banner to the ACF at the Chapel of The Royal Hospital, Chelsea, on the 27th of March.

Over the years a strong link had developed between St Peter’s Church and the Cadet Movement and, in July that year, with the agreement of the Service and Church Authorities, and the local Parish, St Peter’s was chosen as the site for the old Banners to be “laid up”; they remain there to this day.

On the 8th of July 2005, Prince Philip presented a third replacement Banner to the ACF at the Royal Military Academy, Sandhurst. The CCF Banner had been replaced on the 16th of September the previous year. I was very privileged to be at both events.

The old Banners were laid-up at a service at St Peter’s Church on the 30th of September 2005, joining the original ACF and CCF Banners placed there in 1982.

St Peter’s Church’s link to the Cadet Forces stretches back to the 1st of April 1959 when the Cadet Training Centre, Frimley Park, opened. The first training 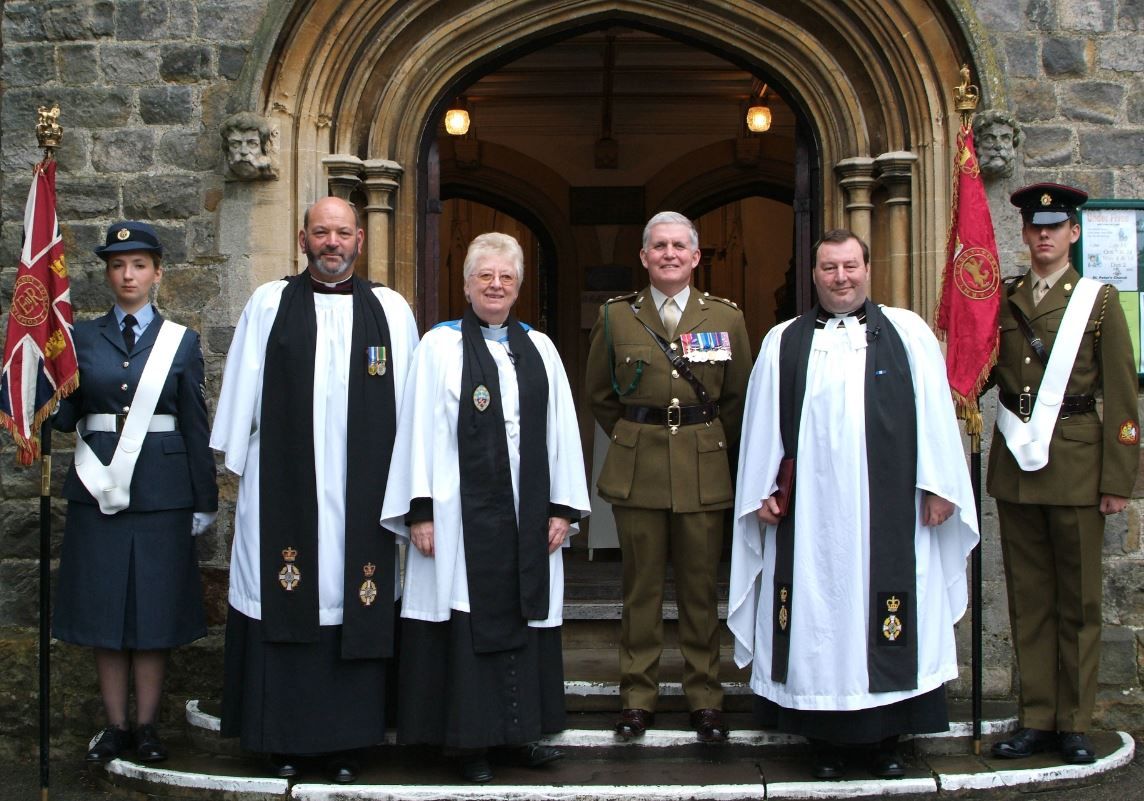 course held there was the King George VI Memorial Leadership Course, which culminated in a service at St Peter’s. These took place for many years, as did church services for each of the three week-long Cadet Leadership Courses held each Summer. 120 cadets from all 3 Services attended these courses each week.
left to right: Cdt Flt Sgt Moss (with the CCF Banner) - Rev Jeremy Heller -
Canon Mavis Wilson - Lt Col Julian Panton, Comdt CTC - Rev Mark Soady -
Cdt RSM Spencer (with the ACF Banner)

On the 17th of October 2008, His Royal Highness visited the Cadet Training Centre on its 50th Anniversary. This event was attended by Canon Mavis Wilson, the Rector of St Peter’s, who was presented to Prince Philip.